The Spoon River College Community Chorus will present A JOYOUS JUBILEE on December 3 and 4 at the First Christian Church in Canton. The concert, conducted by John L. Davis and accompanied by Gretchen Fuller, will feature a variety of classical, traditional, and contemporary holiday songs.  Tickets will go on sale October 17.

Participation in the SRC Community Chorus is open to anyone with a love of music and performance.  No auditions are required and all ages and vocal ranges are welcome.  Rehearsals will be held on Thursday evenings beginning on September 29th at 6:30 p.m. at the Canton Church of the Brethren located at 3rd and Chestnut.

As has become the tradition, this season’s concert will be challenging, but will also feature some of the lighter side of holiday music including such favorites as Ding Dong Merrily On High, Mary Did You Know?, Christmas Time Is Here, Almost Christmas, An Irving Berlin Christmas Medley, Joy to the World and many more.

“The organization originated in 2005 and has grown to include over 100 singers, musicians, and technicians,” said Carol Davis, Artistic Director.  “We have raised funds to establish four $10,000 named endowed scholarships.   The generous support of participants and audience members enables students to pursue their educational dreams.”

A fifth named endowed scholarship has been established through the SRC Foundation in memory of Gail A. Mathis, a chorus member who recently passed away.  Proceeds from A Joyous Jubilee will be donated to this scholarship.

The Chorus recently presented the comedy Bleacher Bums playing to four sold out houses. To learn more about the SRC Community Chorus, please visit www.src.edu/foundation and click on the Community Chorus link, Like Us on Facebook, or contact Carol Davis at cdavis.tenacious@gmail.com. 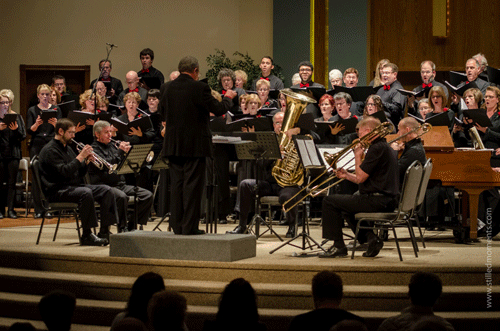